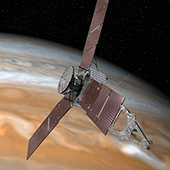 6/13/16, Milan Šurkala
After very successful New Horizons mission at Pluto, NASA is going to carry out the next interesting space mission. There are only 21 days left until Juno spacecraft will reach and explore the Jupiter planet.
K oblíbenýmShare
advertisement
NASA has several ongoing interesting space missions. The New Horizons probe has already explored the Pluto dwarf planet and it is heading for Kuiper Belt now. There is an another mission that should bring interesting facts in the following weeks. This one is about the largest planet in solar system, Jupiter. Juno spacecraft that was released on August 5, 2011, is going to reach this planet on July 4, 2016. On the evening of this day, it will fire its engine for 35 minutes in order to place itself into a polar orbit of the planet (Jupiter Orbit Insertion process - JOI). 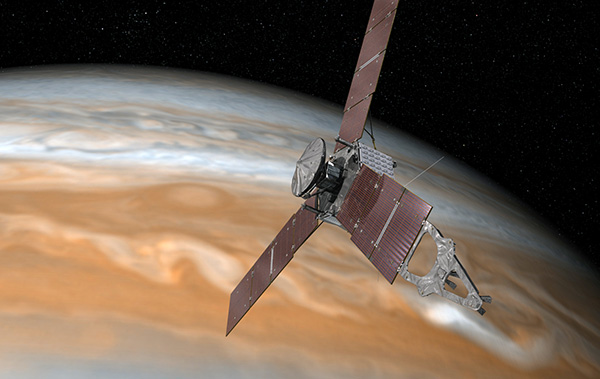 Today, the Juno spacecraft is less than 10 millions miles (16 millions km) away and the distance shrinks by 4 miles (6.5 km) each second. That is approx. 350 thousands miles a day. Because of the massive gravitation of Jupiter, this speed is increasing and it is assumed that it will reach 40 miles (circa 65 km) per second by July 4. The main engine will fire for 35 minutes in order to lower the speed to 1212 miles per hour (0.34 miles per second) to place Juno on the orbit. Juno spacecraft should carry out 37 cycles around the planet in 20 months in the height of about 3100 miles (5000 km) above the clouds. This mission should provide new details about structure of the planet's core and magnetic fields.
Source: nasa.gov
On the same topic