Kontext article
In the near future, transportation is going to be more autonomous and the vehicles will use electricity instead of fossil fuels. The new Mercedes-Benz Urban eTruck solves the second problem. This 26-tonne truck uses electric engines in order to provide low exhaust and noise emissions in cities. Daimler says that costs of batteries are going to fall by 60 percent between 1997 and 2025, whereas the power will be increased by 250 percent. Therefore, electric trucks should make economical sense now and in the future. 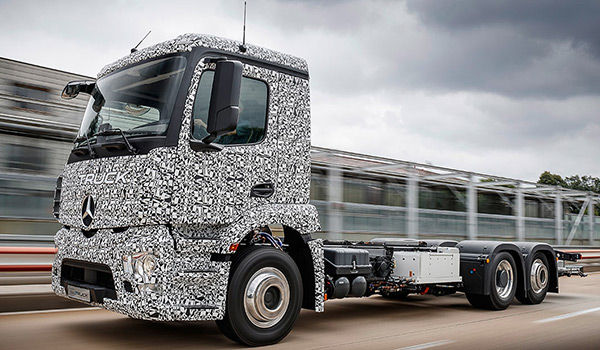 The new Urban eTruck is heavy-duty three-axle truck for short-radius tracks. The output of electrical engines is 2×125 kW (2×170 HP) and the peak torque is 2×500 Nm (2×369 lb-ft). The gearing allows to send up to 11,000 Nm onto the wheels. There are three Li-Ion batteries with total capacity of 212 kWh, that is 2.35 times more than the best Tesla Model S car's capacity. Such an amount of energy should last for approximately 200 km (124 miles) and the battery uses recuperation technology. It is charged when the vehicle is breaking. 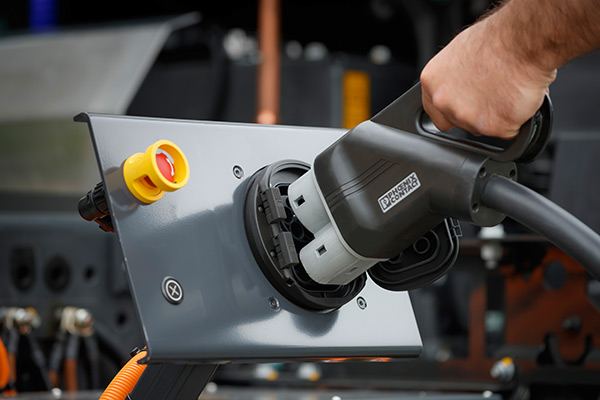 In order to be universal, the truck uses standard Combined Charging System (CCS) Type 2 connector. If the 100kW charging power is used, the battery should be charged in slightly more than two hours. This standard should support up to 150kW charging power that will enable charging in approx. 1.5 hours. Batteries are located inside the frame. That makes the vehicle safer as they are well protected. 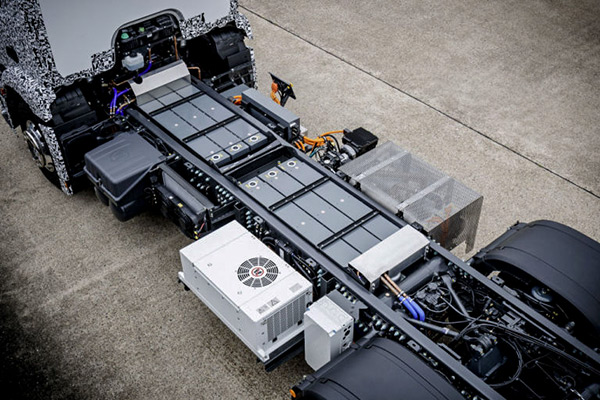 It is known that electromobiles are not lightweight and the eTruck is not an exception. Engine, transmission, fuel tank, shaft and differential in classical trucks weigh about 2700 kg (6000 pounds). That is approximately 2400 kg (5300 pounds) for the propulsion system without the fuel. This system is lighter in the electric version because axles weigh 1000 kg (2200 pounds) and all other electric system parts weigh 900 kg (2000 pounds). That is 1900 kg (4200 pounds) in total. On the other hand, the batteries are very heavy and they add 2500 kg (5500 pounds), increasing the system weight to 4400 kg (9700 pounds). That is 1700 kg (3750 pounds) more. Because of that and the EU Commission's support for alternative vehicles, the gross vehicle weight for three-axles trucks was increased from 25 to 26 tonnes.
In order to save weight, eTruck uses super single tyres 495/45 R 22.5 on the middle axle. Other tyres are standard 315/70 R 22.5 and the wheels are made from aluminium. The heating system uses waste heat from the cooling system of the drivetrain. 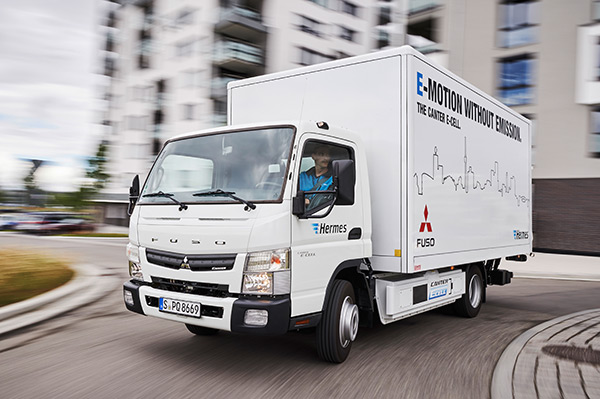 Daimler also presented Fuso Canter e-Cell truck for a trial in Germany. This small truck has the engine with 110kW (150HP) power and torque of 650 Nm. The battery provides 48kWh capacity which allows the truck to drive approximately 100 km. That is not too much but should be enough for city delivery. During the lunch breaks, the battery can be easily charged. If 230V/16A system is used, it will take 7 hours to charge the battery but if 360V/100A system is utilized, 80 % of can be charged in one hour only. There was already fleet trial in Portugal in 2014/2015 with eight these vehicles that covered more than 50,000 km. CO2 emissions were 37 % lower in comparison with the diesel versions (that includes the emission of electricity production) and running costs were lowered by 64 %.
Source: media.daimler.com
On the same topic