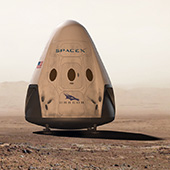 6/14/16, Milan Šurkala
It is not very long ago when SpaceX revealed some details about its plans for human mission to Mars. They also promised to unveil more details and that happened yesterday. Elon Musk told us more about its Mars plans and regular Mars missions.
K oblíbenýmShare
advertisement
SpaceX company plans a human mission to Mars planet by 2025. Such information was given less than two weeks ago and the company also promised to reveal more details in the following weeks. Elon Musk has kept his promise and told the public more about his Mars plans. As we know, the first Dragon spaceship should fly to Mars in 2018. It will be unmanned flight in this case and the Falcon Heavy rocket with 27 first-stage engines will be used to get Dragon into the space. After that, the company plans to send spaceship each 26 months because Mars and Earth are in the closest position to each other (that also includes years 2020, 2022, and beyond). There will be regular cargo missions similar to public transport systems for such 140 million miles long journey. 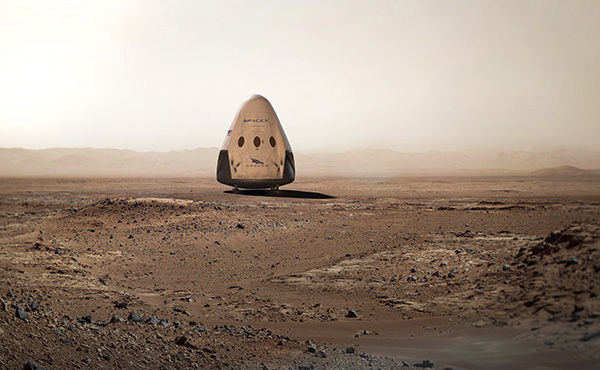 If there is a regularity and the price can be kept low, it can also lead to many interesting experiments because the researches can count on these flights. Nevertheless, minimum fee for such a flight is $62 million. The plan for the first human mission is unchanged. The rocket should start in 2024 and reach the planet in 2025. NASA plans to have its own Mars mission in 2030s but it is already providing technical support for SpaceX's mission. There are some indications that NASA can change its mind and it would focus on the Moon mission more. Musk admits that this mission is hard, risky, dangerous, and difficult. If it succeeds, Dragon will be the largest object that ever landed on the surface of Mars. There were 43 Mars mission already and only 18 of them were successful (for example, the delivery of the Curiosity vehicle).
Elon Musk also wants to reuse the already used Falcon 9 rocket for the first time this autumn. Commercial operator SES should be one of the first customers who are going use the services of the reused rocket.
Source: techtimes.com, washingtonpost.com
On the same topic