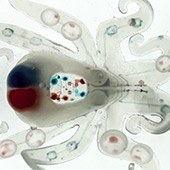 8/26/16, Milan Šurkala
Future robots do not need to be rigid anymore. Hardware researchers have created an entirely soft robot (octobot) that is powered by chemical reactions. They have used a 3D-printing technology to manufacture it.
K oblíbenýmShare
advertisement
Octopus with soft body was an inspiration for creating a new entirely soft robot without any rigid parts and electronics. Harvard researchers have developed octobot, a robot that is an autonomous and entirely soft. The biggest problem was how to make batteries (power source) and circuit boards that are soft and are not using any rigid wires. 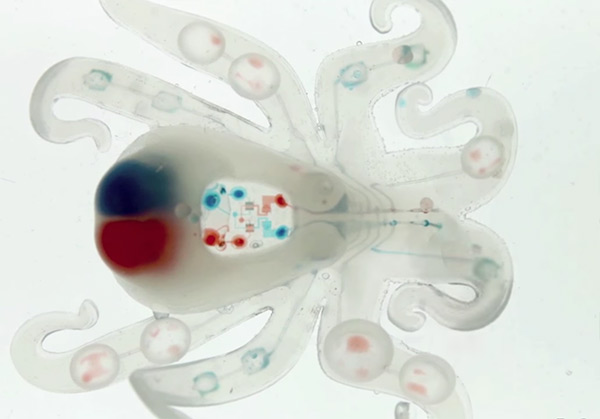 The octobot is pneumatic-based and uses chemical reactions to control its moves. Hydrogen peroxide is its liquid fuel and the chemical reaction inside the body of robot can create a lot of gas that flows into robot's arms and allows it to move. As a catalyst, platinum is used. The reaction is controlled by a microfluid logic circuit. 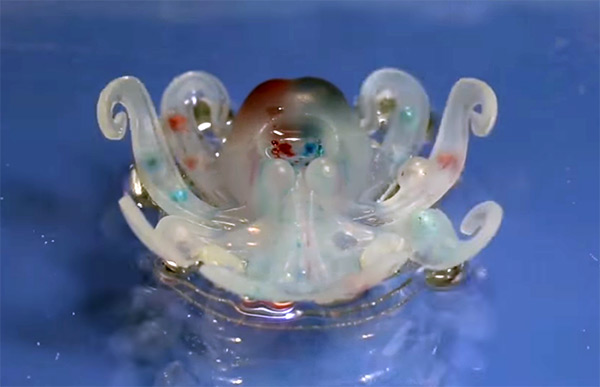 In order to build a robot, soft lithography, molding and 3D print were used. Thanks to that, the robot can be manufactured relatively easily and quickly. Of course, the researchers plan to improve their octobot further. They want it to swim or crawl, the plan is also making it able to interact with environment.
Source: seas.harvard.edu
On the same topic