IBM brings the quantum computer to the public cloud 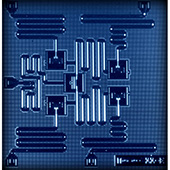 You can try to work with the quantum computer for the first time thanks to IBM that provides you a free access to IBM Quantum Experience. Everyone can carry out quantum experiments on this machine.

Kontext article
Quantum computing is not so futuristic now. IBM company has just released the first quantum computer to the public and it can be accessed using the IBM Cloud. It is called IBM Quantum Experience and the quantum processor has five quantum bits (qubits). It may sound rather limiting but still, there is a revolutionary ability to work with quantum technology and you do not need many qubits to make extremely powerful computer.

Whereas traditional bits can store only 0 or 1, quantum bit (qubit) may store the value of 0, 1 or both at the same time (a phenomenon known as superposition). IBM says that there is a possibility to create a quantum computer with 50-100 qubits within the next decade and such a computer will be more powerful than any of today's TOP500 supercomputers. The new quantum computer is located in Yorktown Heights, New York.
Source: ibm.com
On the same topic