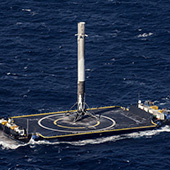 SpaceX has successfully landed its first stage of Falcon 9 rocket on the ground only once. Now, the company managed to land on the ocean droneship for the first time after four unsuccessful attempts.

Kontext article
SpaceX company wants to reuse parts of the space rockets in order to lower running costs. Nowadays, one flight of the SpaceX Falcon 9 rocket costs more than 60 millions dollars. The first idea is to reuse the first stage of the rocket. In December 2015, SpaceX managed to successfully land the first stage on the land but it was unsuccessful to land on the ocean droneship. There were already four attempts that failed but April 8, 2016 was finally the lucky day for this project. 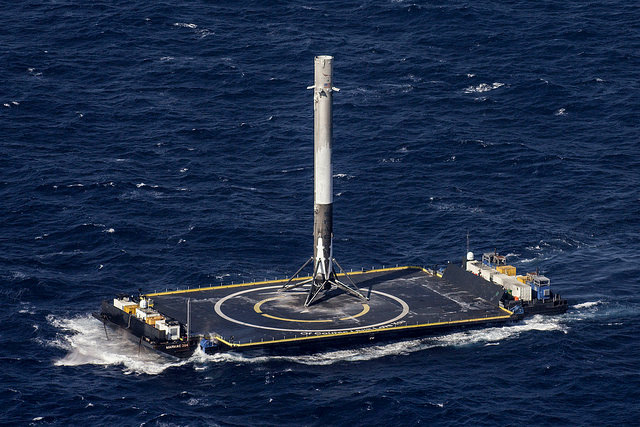 Source: Flickr SpaceX (public domain)
The first stage was separated after 2.5 minutes from the rocket, turned around and the attempt for a sea landing began. The droneship platform OCISLY (Of Course I Still Love You) was about 185 km away of Cape Canaveral when the first stage successfully landed there after approx. 8 minutes. The ocean landing is quite important because it requires less fuel to adjust the direction of the first stage. If the rocket should land on the ground, there have to be more burns that adjust the speed, position and direction of the module whereas sea landing is closer to the natural path of returning to the Earth surface.
Source: theverge.com, nbcnews.com
On the same topic