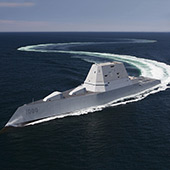 USA is preparing a new stealthy warship DDG 1000 (USS Zumwalt). Soon, it will undergo so called ship activation process that includes testing of its weapons assembly of various systems. The ship is less visible to enemy radars thanks to its shape.

Kontext article
US Navy will soon have a new interesting ship to use in battles. It is called USS Zumwalt (DDG 1000) and it is in Portland, Maine from May 2016. It will not stay for a long time because this ship is going to be moved to San Diego, California where the ship activation process is going to be carried out. USS Zumwalt will get various systems and technologies, it should also make test fires from its weapons. 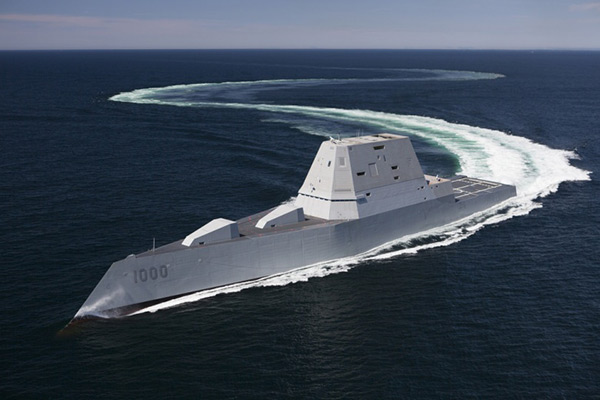 The ship is 610 feet (185 metres) long and thanks to its shape and the arrangement of antennas is less visible to enemy radars. It looks like a small fishing boat on a radar if it is detected at all. The ship should be able to penetrate enemy areas and carry out a land or a water attack. Now, it should be equipped with a radar, a dual-band sonar and guns. Its dual-band sonar is able to detect not only submarines at long distances thanks to longe-range sonar but also mines or enemy fires thanks to the second sonar system with a higher frequency.
USS Zumwalt will be equipped with a broad range of weapons. It will have Tomahawks, torpedoes, standard missiles (SM2, SM3, and SM6) as well as the vertical launch anti-submarine rockets ASROC. The first system to be tested are Evolved Sea Sparrow Missiles and SM2s. It has also BAE Systems' Advanced Gun System that is able to fire at the distance of 64 nautical miles (more than 118 km). The ship is also suitable to be used in shallow waters thanks to its shallow-draft.
The power system is able to provide 78 megawatts of electrical power and, therefore, it is probable that USS Zumwalt will be using laser weapons and railguns in the future. DDG 1001 is the second ship of this kind that is 75% complete and the construction of DDG 1002 has also been started.
Source: nationalinterest.org, scout.com
On the same topic